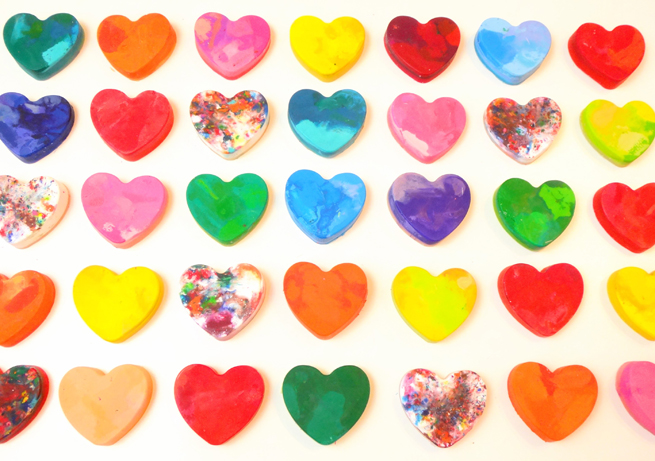 Being out of grade school for so many years, I forgot what an important holiday Valentine’s Day is for school kids. 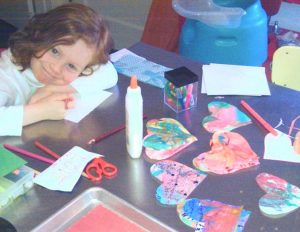 In 2010, when Trixie was in Pre-Kindergarten, I wanted to find something easy for her to do that was creative and fun for both of us.  I had her paint on watercolor paper and fill the whole page.  After the page dried I cut out large heart shapes.  Then we attached the hearts to pieces of patterned scrap paper I had lying around, added some drips of Elmer’s glue, and dusted the glue with glitter.  The glitter kept flaking off, so I made simple envelopes out of tracing paper and closed them up with a sticker. They were so cute! 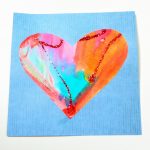 After school that day, we looked through her valentines and I was surprised that they were all store-bought character cards or candies.

What had I missed in the 25 years I had been out of the valentine game?

I remember getting mostly handmade valentines from my classmates and loving it.  My mom is still a big fan of the heart-shaped doily and my mother-in-law would make a handmade card for Trixie when she was little.  I wanted Trixie to experience making cute things for her classmates like I did as a child.

The next year our Kindergarten valentine project was making hearts from melted crayons. That was a favorite, but Trixie didn’t want to do it every year (we did do it again, read on!).

One year we made heart-shaped potato stamps and stamped paint onto folded construction paper cards. Those were pretty and simple!  You can see that I don’t stick to the traditional colors of Valentine’s Day because I think love and life are colorful (check out our Holiday House Tour for more non-traditional holiday decoration). 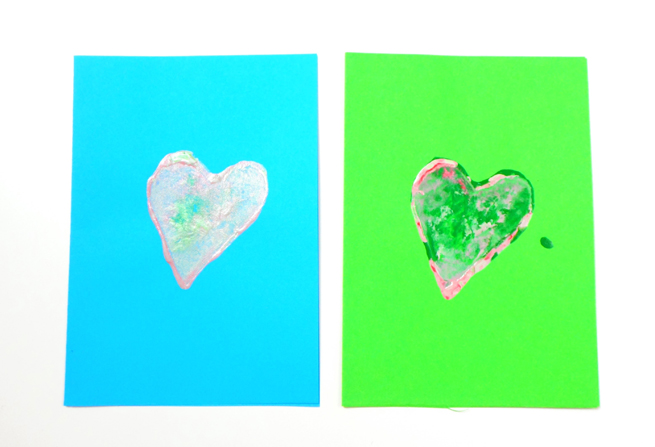 Another year we gave tiny watercolor paint sets and printed out a card with a clever note.

I think the next year Trixie insisted on store bought cards, and last year I actually ordered custom cards from Pear Tree!  Harper’s classmates were now in the mix since he started Pre-Kindergarten that year.  Purchasing custom cards (with a coupon of course, I’m constantly thrifty!) was a fun, easy solution. 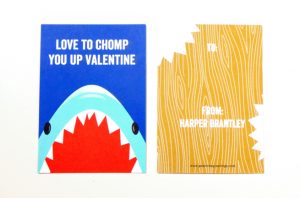 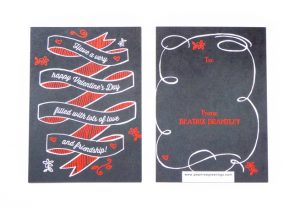 This year Trixie is in 5th grade and Harper is in Kindergarten.  I figured I would order cards again and call it a day.  BUT, I have been working on cleaning out the basement.  You see, when we moved here the movers put every box that was labeled “basement” in a huge pile crammed into a storage room.  (Uh, not helpful guys).  Steve and I were busy with the kids and the movers on the first and second floors as well as the garage and yard.  So, there the boxes sat. And sat. And sat.  During various forages into the basement storage room Steve kept trying to make sense of it all, but we needed a solid week to organize and unpack things.  That week never came to be.

This year, after the Christmas decorations came down, I had had enough with the chaos and wanted more order down there.  We worked all MLK weekend and hardly made a dent, but we did set up a new storage area for holiday stuff and we unearthed many things – like my huge stash of Crayons!!

How did I get a huge stash of Crayons you ask?  Well, after the year we made Crayon hearts, I was kind of on the lookout for a cheap supply incase we wanted to make them again. I asked Trixie’s Kindergarten teacher what the teachers did with all of the broken and used Crayons at the end of the school year.  I couldn’t believe it when she told me that they throw them away!  (They also throw away the markers, but thankfully Crayola has set up a recycling program for their markers, phew!)

Anyway, I asked her to save the used Crayons for me for my future crayon-molding projects.  She proceeded to tell all of the other teachers in the school that she had found a crazy person to take all of their Crayon leftovers.  At the end of the school year she reminded me to pick them up so I asked her to just stick them in Trixie’s backpack.  She said they filled a box and that she would leave it outside her classroom the next day.

When I went to pick them up, I was thinking it might be a shoebox full. What I found was a GIANT box filled with gallon-size storage bags bursting with Crayons.  I couldn’t even lift it!  I had to have Steve to pick it up on his way home from the commuter train.  I told him it was Crayons, and he didn’t understand why I couldn’t just stick it under the stroller and get it myself.  He found out why as he struggled those 3 blocks home from the school.  I felt like I had won the lottery.  Steve was a little concerned.

We used some of those Crayons, but for the most part they stayed stored in the basement of our old house.  We moved that giant box of Crayons to our current house and since then I have wondered a few times where it was, but knew I wouldn’t have any luck finding it.  Finally, there it was!  I immediately scrapped the idea of ordering custom valentines this year and proclaimed to the kids that we were making melted Crayon hearts!

It is a very easy process, here it is in pictures, step by step: 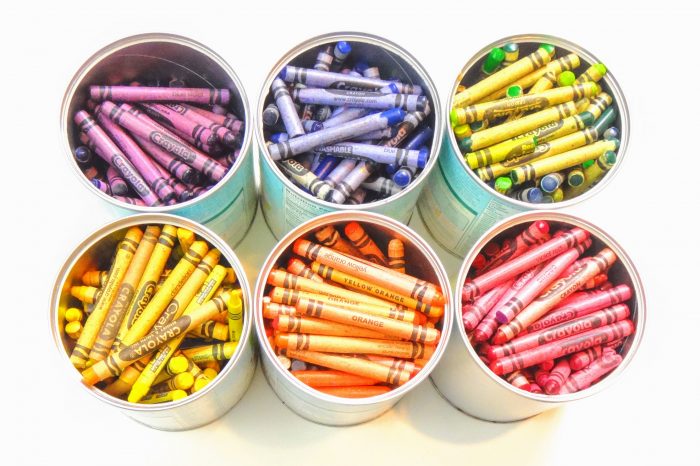 The containers in the photo are another example of my saving stuff.  Look at these old formula cans! (I hit a point when I was nursing where I couldn’t get rid of Mastitis and had to supplement)  I organized the Crayons by color family and then got busy with my trusty Exacto Knife (The first time I made these I peeled off those labels, by hand. Yikes, too much work). 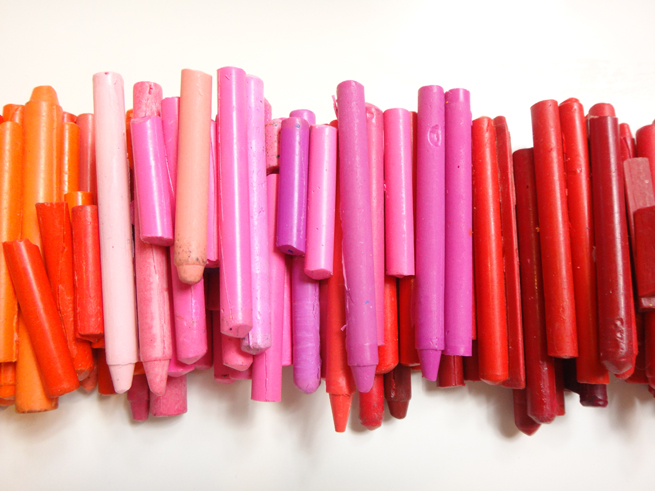 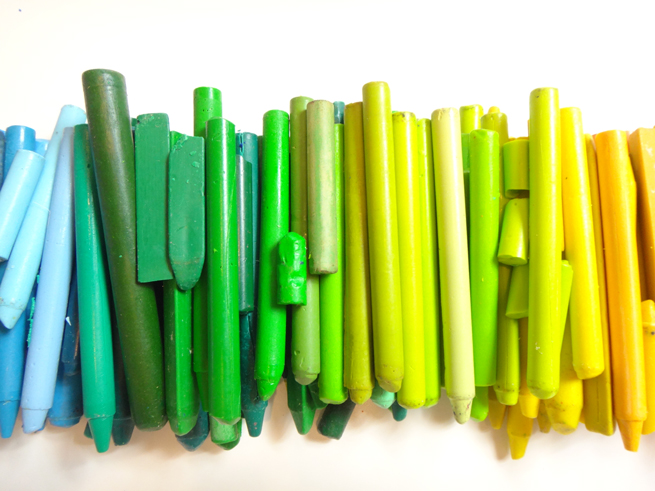 After the labels are off it’s time to chop.  The first time I chopped Crayons I did it on one of my nice wooden cutting boards.  That was a mistake!  This time I had Steve run to Goodwill for me and he found a cutting board for $0.99 that I can use for crafty projects. 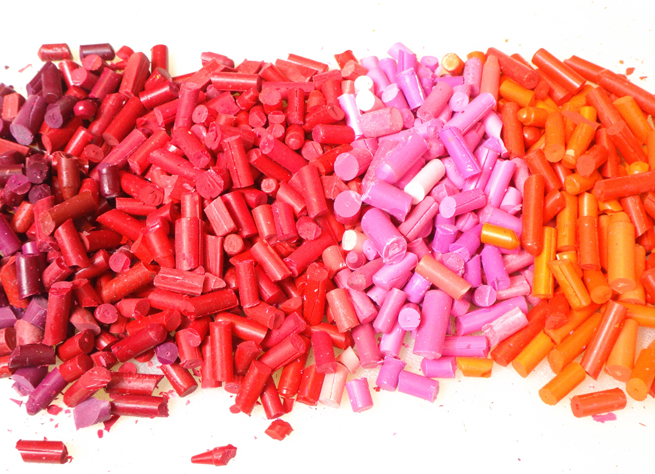 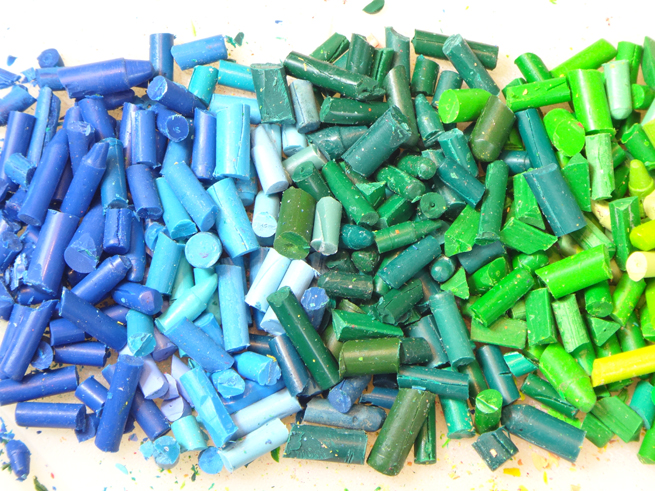 Once chopped, I sorted them into muffins tins–by color family again–so the kids could grab them easily. 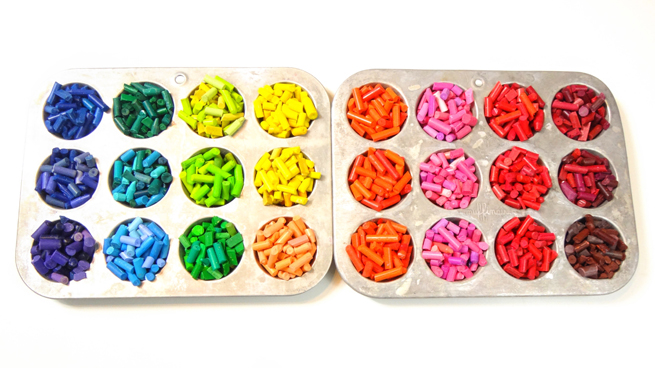 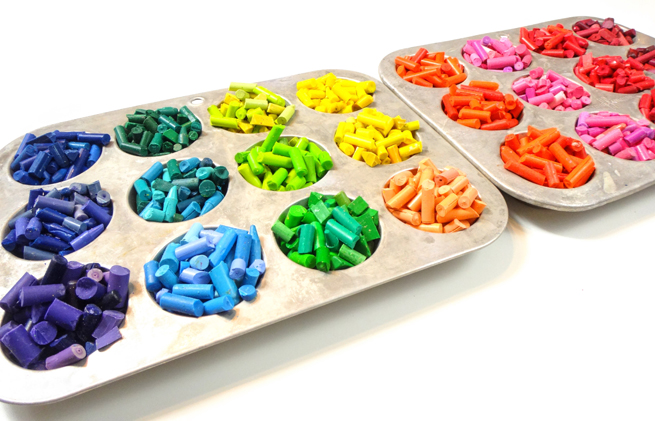 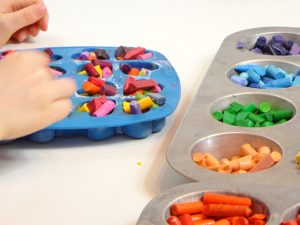 Next, we used our old red molds by Wilton.  They are made from super-flexible silicone and you can buy them from Amazon in blue.

(Pictured to the left is an old blue heart mold from IKEA, but the Wilton molds are much easier for kids to use.  We had to wait until Daddy came home to pop these babies out of the mold and some of them broke.  BUT, the great thing about that is all you have to do is pop them back in a mold and remelt any that broke.) 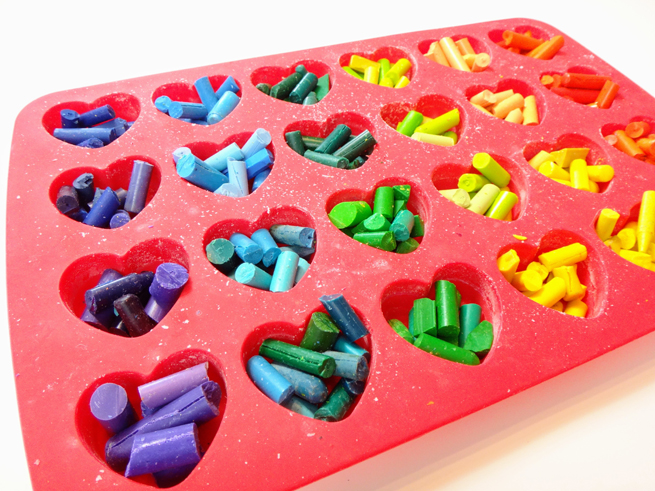 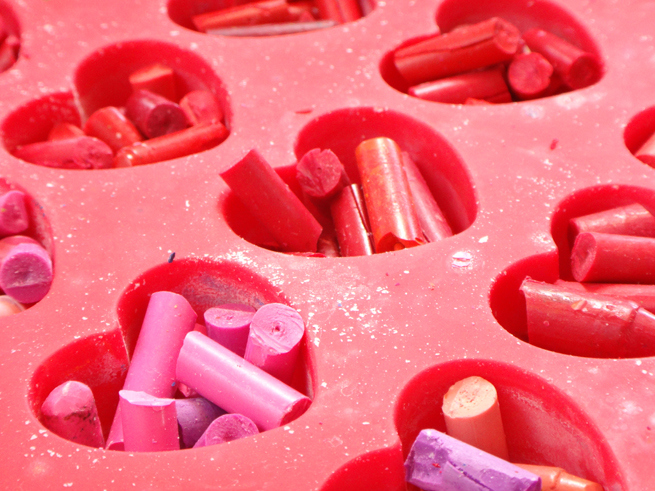 The kids decided what colors they wanted to use and placed the pieces into the molds.  Then they go into the oven on a baking sheet (very important!) at 300′.  It takes a while for them to melt completely, but you can’t mess them up.  I have seen recommendations to bake for 10 minutes, but it always takes us at least 20 minutes for them to fully melt.  Just keep an eye on them, it’s fun to turn on the oven light and watch them melt. 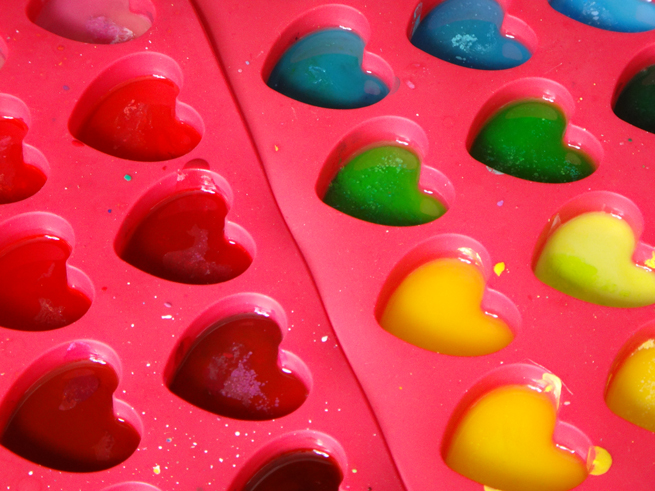 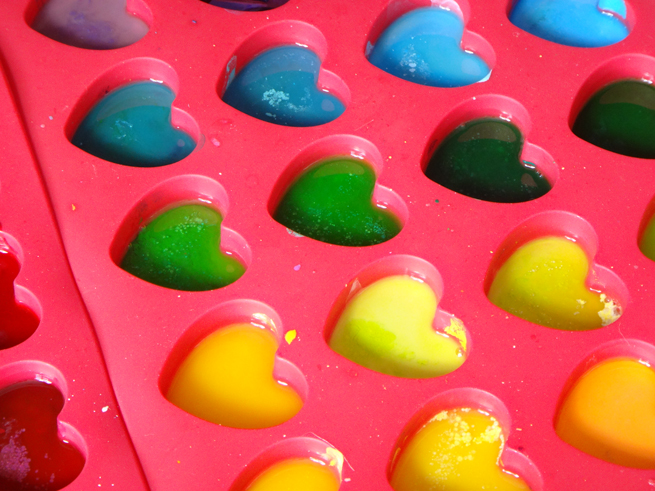 Once they are all melted take them out of the oven and place the baking sheet on a cooling rack.  The fridge or freezer will speed up the process.  It is really important to make sure they are totally cool before touching them as the soft wax gets messy with fingerprints very quickly. 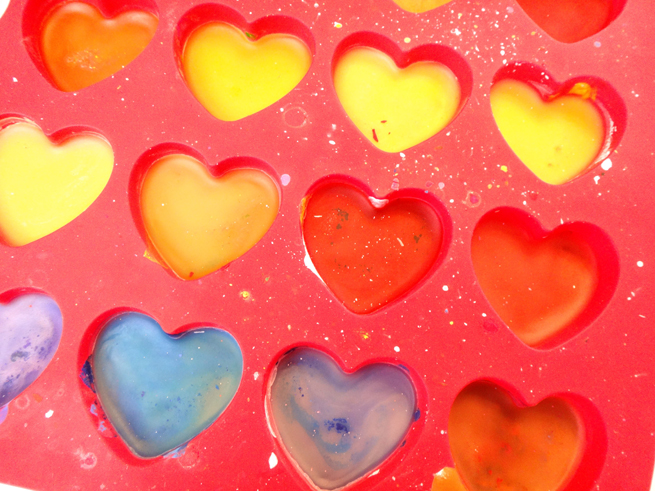 Once they are cool and solid again, they are really easy for the kids to pop out.  Viola!  Works of art! 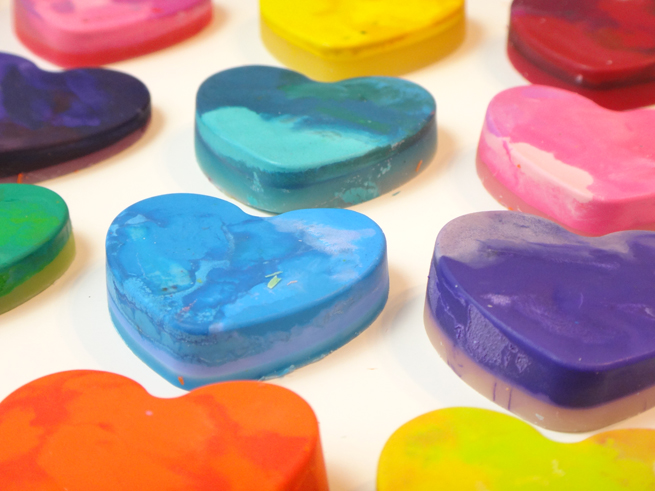 Trixie decided to mount one heart to a piece of cardstock and write a message on the back of the card.  Then she slipped them into a 3’x4′ plastic bag and sealed it with a sticker. 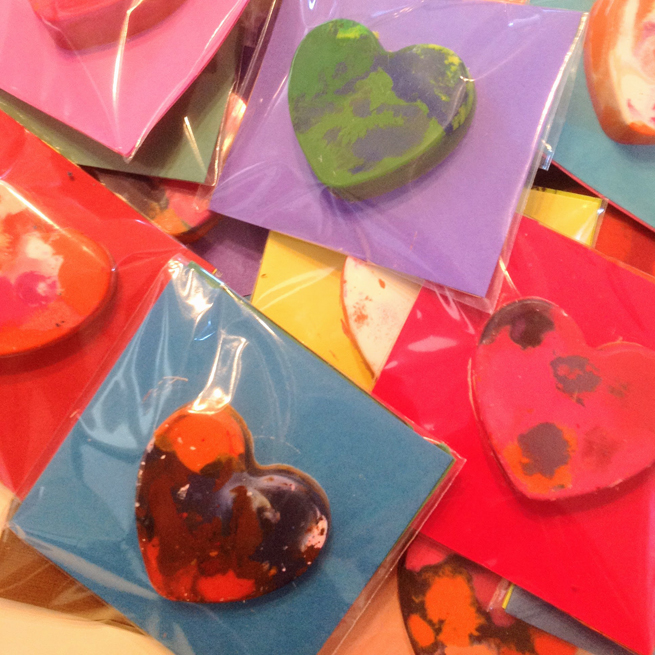 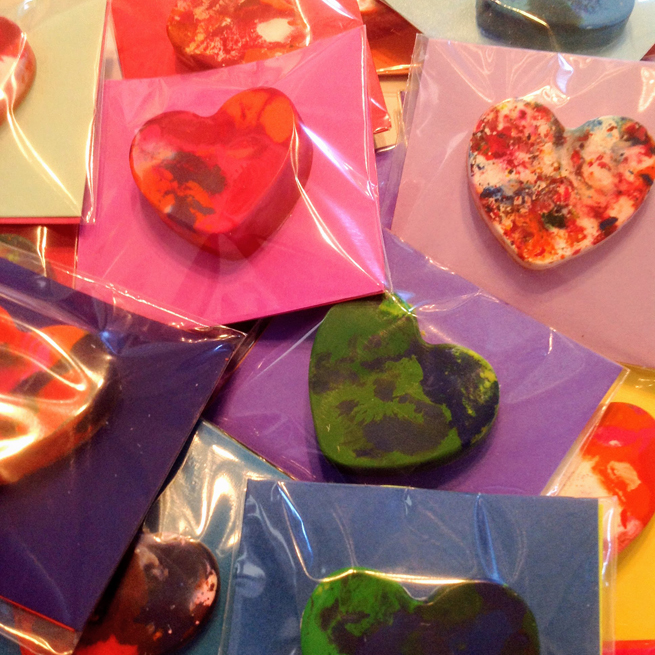 Harper and I made enough (over 150) so that each of his classmates and teachers could have five hearts. We packed them into 4″x7″ plastic bags and closed them with a label I designed in Adobe Illustrator and printed out on cardstock.  I just got back from his Valentine’s Day party at school and they were a big hit. 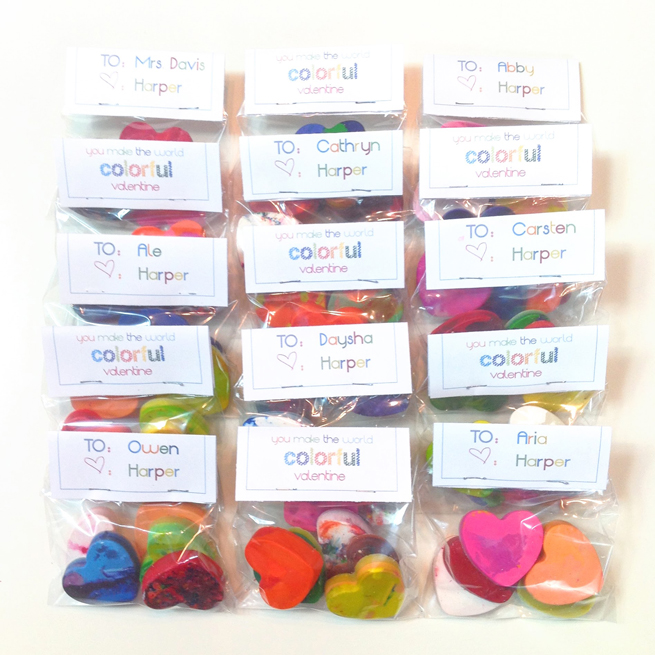 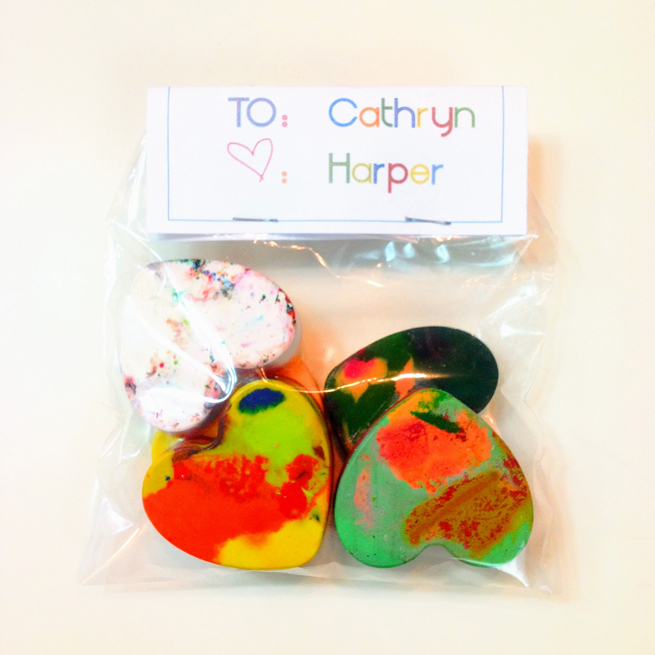 Would it have been easier to run to the store and buy a few packages of cards and some candy, YES!  But any time we find a crafty project that is easy and we love to do it’s a chance to create art together.  I am also passionate about teaching the kids how important it is to recycle absolutely everything!!

Hope you have had a wonderful Valentine’s Day!

The Bungalow We Used to Call Home

An Old Clock Repurposed – Before & After 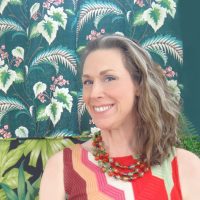